This is a great Lord of the Rings co-operative game for 1-4 players.

I have played my fair share of RPG style board games. It is refreshing to play against an app instead of a human. The App does a great job of getting you through the story, in a smooth well thought out manner. The campaign is fun and easy to play which makes this a great entrance level game as well as a fun game for more advanced gamers. You explore, fight and explore again to try to reach your objective, beware though, as there is a turn limit. The last game I played was very close we passed the last test just before we were going to fail the game. It was a very close thing and one of our heroes also had to make a last stand to survive. We discovered that it is a good idea to pick your fights and run to the next objective. Just don’t leave too many monsters behind otherwise they’ll creep up on you. 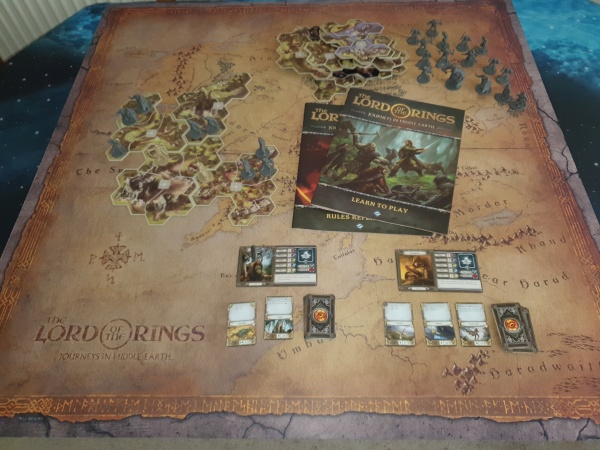 Thanks to the app, you can explore the map as it grows, you and your companions open up more of the story being played out as you carry on exploring. You turn cards to pass or fail tests that come up during your adventure, so those who don’t like dice can breathe easy. Battles are also decided by pass/fail tests for battle, with the monsters able to retaliate, so be careful.
Each game of the campaign can easily be played in one evening (1.5-2.5 hours.) As the expansions add more monsters, the App will add more to the story. There is also a beautiful play mat for this game with a map of Middle Earth as you can see in the background of the picture above.
This is a great game! I look forward to discovering more and more of this game.

You can order it at: https://www.bgextras.co.uk/the-lord-of-the-rings-journeys-in-middle-earth-board-game-i3670.htm