Yet another great game by Stonemaier Games. This one is an amazing game for playing with people new to Board Games but is also fun for those who are more experienced players. I played this game with a group of my friends which included one who doesn’t usually play board games (She actually likes to say “there is a reason they call them Board Games” hinting that she thinks they are boring) Well after we played she actually pushed for us to continue playing, we played five games in a row. This game can easily be played in less than thirty minutes. 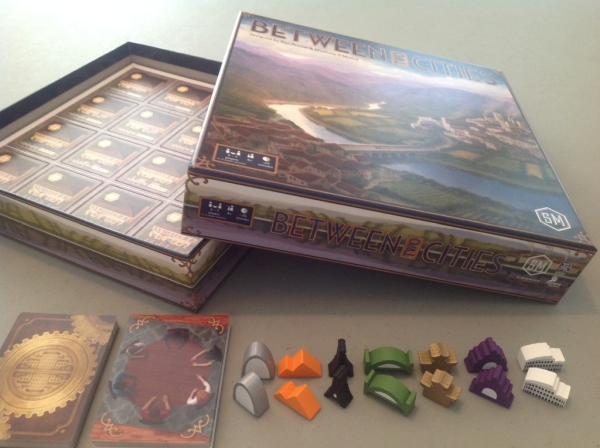 You all go at the same time which makes the game flow very well. Each player is building two cities in a four by four grid, one with the player on the right and one with the player on the left. So you are between two cities (I wonder where they got the name for the game from.) There are three rounds, the first round you all start with seven tiles, choose two (one for each city) then place the rest of the pile under the city to your left. Once everyone has chosen their tiles everyone discusses with their neighbours where to place the tiles. When everyone is done you pick up the pile from your right and choose two new tiles and continue. When you get down to three tiles you chooses two and the third gets removed from the game. The second round is played with double length tiles, each player gets dealt three tiles, they choose two and discard the third. They then place them one in each city. The third round is like the first round but the remaining tiles get handed to the right. The placement of the tiles in the cities determine the score. There are different types of tile, factory, house, inn’s, shops, offices and parks. Once all three rounds are completed, each city has it’s score worked out and then you work out whose second highest city has the highest score. This stops you from building one really great city. Negotiating is important in this game.

This game is a great quick game even with 7 players and you can order it here.