The latest terrain piece to be released for Marvel Crisis Protocl  is the Quinjet was used primarily by the Avengers for transportation to various locations, the Quinjet is first designed by the Wakanda Design Group, headed by Black Panther, T’Challa. Each one is equipped with VTOL capability and turbojet engines. A quinjet can reach 2.1 Mach. Two highly specialized ultra-large Quinjets were used to transport various superhero’s through space during the Infinity Crusade.
We have been asked about the scale of the quinjet compared to models and so in the picture below as well as the fully assembled qunijet we have included a seperate figure so you can see the scale. 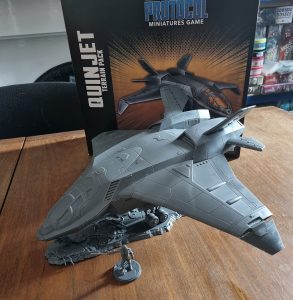 This is a beautiful model that can be used for emergency extraction or emergency entrance. The lovely thing is you decide if it is protected and you can order it   https://www.bgextras.co.uk/marvel-crisis-protocol-quinjet-terrain-pack-i5633.htm