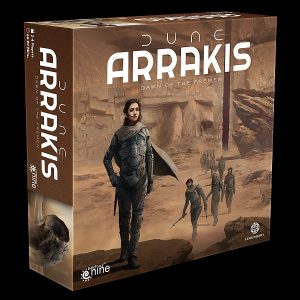 Gale Force Nine are good at doing great games on a tv or film theme, this is one of them.  Arrakis is a resource and conquest game set on the planet Arrakis back before the famous book and film to a time when the Fremen are just thirty generations into their time at Arrakis and over 100 generations before the Atreidise family arrive. In this cutthroat world you are trying to excel at not only surviving, but doing it with finesse.
You are in charge of a clan of early Fremen (Gold tribe, blue tribe, green tribe or the redtribe )and trying to win in one of two ways, by either having enough Sietches or being elected by the council. There is a Initiation stage, Development Phase, Production Phase, Trade Phase a Shipment Phase, an Action Phase and a Council Phase, some of these could be cancelled by a dice roll. 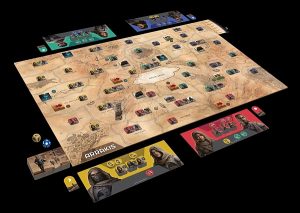 Alliances, quite often, after a few rounds in the game, a player will have built a strong position that no one feels able to challenge. If they continue they will probably win. in such a position.  It may be in the best interest to form an alliance with another player. If so they must discuss it with the council and recieve an unanimous vote to agree for them to proceed. if agreed the number of Seitches raise accordingly and the get other benefits like being able to cross each others lands swap territories and share the win. forbidden if not in an alliance.
As I have stated on more than one occasion Gale force Nine are a great company for getting the feel right for the matter of the games, as usual they are spot on, if you want a fun game that makes you feel like you’re actually there fighting for every step you take, this is it.