Another great game from Gale Force Nine and it is set in the wonderful Dungeons and Dragons world. You are in charge of one of the Drow houses fighting for control of the Underdark. (If you don’t know the D&D universe The Drow are the Dark Elves and are usually followers of the dark gods.) 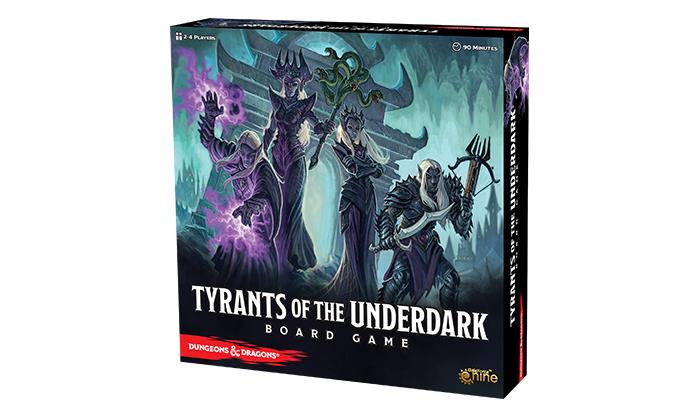 As there can only be one leader of the Drow you must use hired minions of
the dark powers to assassinate your enemies while trying to keep your defences strong, so build up your team with fellow Drow, Dragons or minions of the Dark powers to attack those who oppose you in your battle to seize power for your house and ultimately for you.
Each player leads a house of Drow in a section of the Underdark below the Sword Coast. The Drow house is represented by a deck of cards, with each card being a minion in that player’s deck. Each minion belongs to one of five aspects of Drow society, and those aspects correspond to different strategies in the game, e.g.,  malice minions excel at assassinating opponents’ troops, while ambition minions are best at recruiting additional minions and promoting minions to your “inner circle”, which is a special zone that increases their value at the end of the game.

When you set up the game, you create an 80-card deck by shuffling two 40-card half-decks together, with the half-decks being Drow, Dragons, Demons, and Elementals.
A central marketplace has new minions that can be recruited through influence, one of two resources in the game; purchased cards are placed in your discard pile, then shuffled together with other cards in your deck when needed. The other resource is power, which allows you to place troops on the game board, expand your forces across the map of the Underdark, manipulate happenings in the city, and assassinate enemy troops.
Players gain points by controlling sites, recruiting valuable minions, promoting minions to your inner circle, and assassinating troops, and whoever ends the game with the most points wins.
In short it’s a great game for an evening of fun and you can order it at: https://www.bgextras.co.uk/tyrants-of-the-underdark-i5267.htm