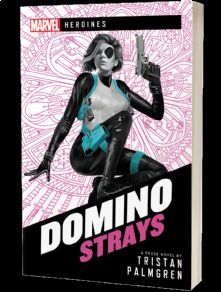 Domino, Strays
A Marvel Heroines Novel
by Tristan Palmgren
For those who don’t know her Domino has worked as part of several teams including X-Force as well as having to work with Deadpool and Cable.
The story is set around Domino whose powers are based on luck, although not always good luck. The writer builds up a good feel for a complex and very messed up personality and then jumps back and forth in her history to explain how she became that way. She is a mercenary who is starting to get a Heroine complex and is working as part of a team that includes the Black Widow. They have a new job, they have to try and save a brother and sister from a cult that they willingly joined. Will this give Domino the chance to right some wrongs from her past or will it all go very badly wrong.
This book is the first of a set of Marvel books that are there to help us explore the Marvel universe and try to understand the heroes and villains that inhabit it, as well as giving us an insight into what is really motivating them.
If the rest of the collection are as good as this one, we will be in for Quite a treat.  Order your copy at: https://www.bgextras.co.uk/marvel-heroines-novel-domino-strays-i4787.htm