Wolverine and Sabretooth are an interesting pair of personalities, their animosity towards each other is huge, as Sabretooth hunts down Wolverine on a regular basis to torment and hurt him as much as possible. They both share a murky past with the mysterious Weapon X Program that Wolverine remembers very little of and yearns to get his memory’s back from those days with an intensity that is almost super powered in its own way. They also are very similar to each other as they both have claws (although Wolverines are covered in that unbreakable metal Adamantium which also covers his bones) and a healing factor, a very keen set of senses , added to the towering anger they both share. Yet they seem to come at the anger in so different ways, where Wolverine is reluctant to lose his anger, Sabretooth embraces his whole heartedly and revels in the destruction he causes. Sadly in the first X-men film Sabretooth was portrayed as very stupid which in the comics you can see he definitely isn’t.
Wolverine is probably the best known of the X-men, He was the only Super powered character that resonated strongly with me as a teenager due to my anger issues growing up. It is a shame we had no films back then but we did have a great cartoon series as well as the comics to enjoy. Wolverine is a very complex character, he tries to drive away those who get too close to him and uses a prickly persona to keep away others as well, not because he doesn’t like people but because he cares for people and due to the fact that he has been hurt a lot in the past, puts a barrier up to try to protect himself from them. There is a love triangle between Cyclops, Jean Grey and himself that causes a lot of strife for the team. 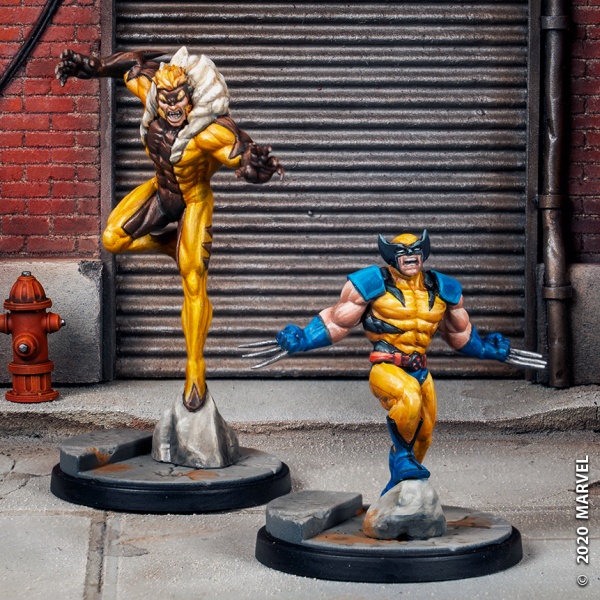 The battles you can play through with Wolverine are so varied seeing as he was once a member of one of the later Avengers Teams, he fought with the Hulk and to be honest most everyone else at one time or another.
You can order this at: https://www.bgextras.co.uk/marvel-crisis-protocol-wolverine-and-sabertooth-i4711.htm