In this blog we are going to take a look at the first 4 expansions packs released for Marvel Champions they are Green Goblin scenario pack, Captian America hero pack, Ms Marvel Hero Pack and Wrecking Crew Scenario Pack. 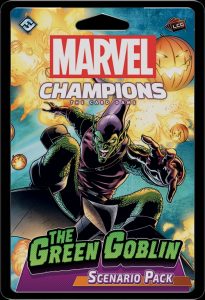 Norman Osborn is a fictional alter ego of the supervillain appearing in American comic books published by Marvel Comics. The character was created by writer-editor Stan Lee and writer-artist Steve Ditko, and first appeared in The Amazing Spider-Man #14 as the original and most well-known incarnation of Green Goblin. He is also the father to Harry, Peter Parker’s best friend from college. Due to a mishap in an experiment Norman became the Green Goblin. This pack contains 78 cards adding 2 new scenarios and 4 moudlar encounter sets with villain cards and more chance to explore the Marvel universe.  Can you stop the Green Goblin and his goblin army from overrunning New York City?  Order this at: https://www.bgextras.co.uk/green-goblin-scenario-pack-for-marvel-champions-i4106.htm 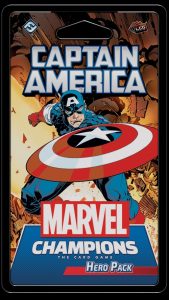 Since Marvel revived him in 1964 he has been one of the best known and well loved super heroes. An all American hero (as American as apple pie(which actually is European.)).  His strength, speed and leadership abilities makes him a formidable opponent. A great addition to the team.

This pack contains  a fully playable deck right out of the box that includes fifteen Hero cards, seventeen cards from the Leadership aspect and eight neutral cards.  It also includes a nemesis set featuring the nefarious Baron  Zero.  Order this at:  https://www.bgextras.co.uk/captain-america-hero-pack-for-marvel-champions-i4168.htm 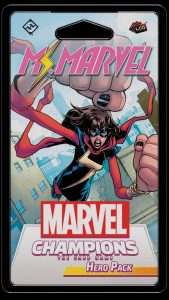 Ms. Marvel is the name of several fictional superheroes appearing in comic books published by Marvel Comics. The character was originally conceived as a female counterpart to Captain Marvel. Like Captain Marvel, most of the bearers of the Ms. Marvel title gain their powers through Kree technology or genetics. Marvel has published four ongoing comic series titled Ms. Marvel, with the first two starring Carol Danvers and the third and fourth Kamala Khan.   This version is the Kamala Khan, a confused teenager coming to terms with her powers, while getting through all the usual teenage angst?

This 60 card hero pack contains a  fully playable deck right out of the box.  It includes 29 new cards that can be used with any hero deck and also a nemesis set featuring the insidious Thomas Edison.  Order this at: https://www.bgextras.co.uk/ms-marvel-hero-pack-for-marvel-champions-i4169.htm 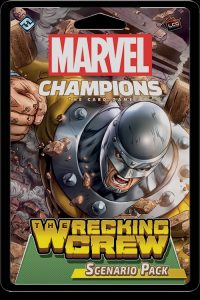 The Wrecking Crew is a team of four supervillains—the Wrecker, Bulldozer, Piledriver and Thunderball—appearing in American comic books published by Marvel Comics. While not featured on the cover, the Wrecking Crew’s first  appearance is in The Defenders  #17 (Nov 1974)

The Wrecking Crew are formed when Dirk Garthwaite—the Wrecker—is approached by Dr. Eliot Franklin in prison and asked to retrieve a gamma bomb Franklin had designed, with the intent of ransoming New York for millions of dollars. The Wrecker had formerly been a violent criminal who demolished crime scenes with his crowbar, but gained his power when he was mistaken for Loki and given mystical powers by Karnilla the Norn Queen. Garthwaite manages to retrieve his enchanted crowbar, and during a lightning storm tells Franklin and fellow prisoners Henry Camp and Brian Calusky to grip the weapon simultaneously. A lightning bolt then strikes the crowbar, increases the Wrecker’s power and transforms him and the other three men into the Wrecking Crew. They promptly escape from prison and, in the course of searching for the gamma bomb, are defeated by the Defender and Luke Cage.  Over the years the Wrecking Crew have followed a very familiar cycle—escape from prison,  fight (and subsequently lose to) superheroes, and be returned to prison. The Wrecking Crew have battled the Avengers, Captain America, Iron Fist, the Runaways, Spider – Man, Namor the Sub-Mariner, the Thing, ,Doctor Strange, Daredevil, Alpha Flight, the She-Hulk and the X-Men, but their main foe is Thor.

This 73 card pack contains new scenario putting  the four villains in play at once, each with their owns ide scheme and deck.  Can you stop Wrecker, Piledriver, Bulldozer and Thunderbolt and put them back where they belong?   Order this deck at: https://www.bgextras.co.uk/the-wrecking-crew-scenario-pack-for-marvel-champions-i4194.htm