Another cram packed expansion, including the (yes you’ve got it) Seventh and ninth Doctors, their companions (will go into that more later) more Timey-wimey cards which includes the leather jacket from the ninth Doctor (Christopher Eccleston) the umbrella of the seventh Doctor (Sylvester Mcoy) and Excalibur. Adding more Doctors improves the regeneration action in the game a lot. 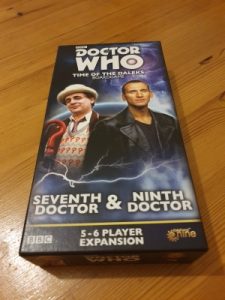