Now this is a different version of the game of Pandemic, as you aren’t fighting diseases, but trying to protect Rome from hoards of barbarians. This version also adds a few different mechanics to the gameplay for example the Barbarian Hoards move so very differently to how the diseases spread in normal Pandemic, they spread along a route. You actually fight the hoards by recruiting legions to help with the fight and then rolling as many dice as you have help, the results can either destroy a hoard, destroy a hoard but also destroy one of your legions or it could trigger your leaders special power (written on his card) You still have city cards to help move around the board, which is of the ancient Roman empire. You can move around the map building forts to be able to recruit your legions and then try to forge an alliance with the barbarian hoards by discarding 4 city cards of their colour on a city with one of their barbarian hoards on it. Your aim is to make alliances with the hoards or eliminate them. As usual there are many ways to lose at this game if Rome or too many other cities are sacked, if your resources run out or if the hoards overrun the Roman territory. 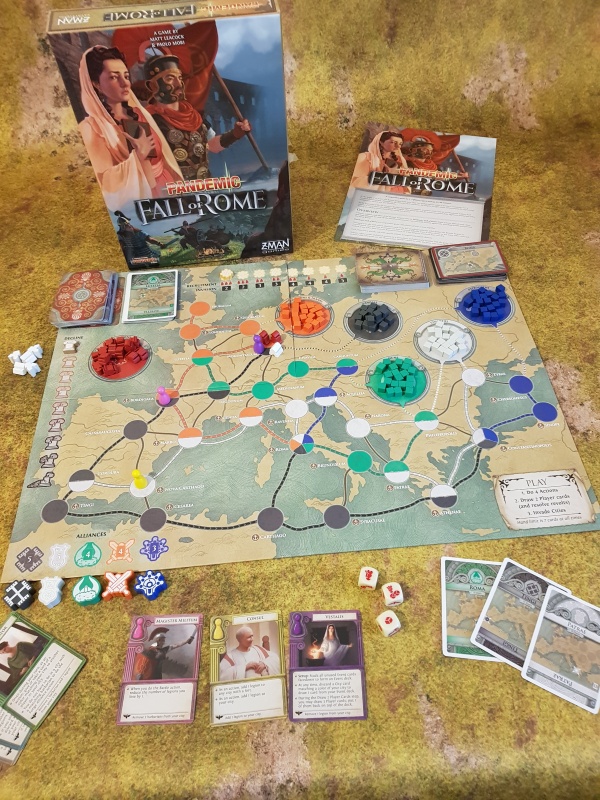 There is a solitaire play as well, where you control several generals but one card hand. You can store several city cards to make play do-able. This game is different enough from Pandemic to make it worth having if you want a change from the orriginal game. If you don’t have Pandemic, then it’s deffinately worth investing in this game.

You can order this game at: https://www.bgextras.co.uk/pandemic-fall-of-rome-i3350.htm