If you are looking for more variation in your game, then these maps are a great way to add it. The maps are set on Shaggai (makes sense as they are called the Shaggai maps) the maps are set during the destruction of Shaggai as it spins too close to the Hellworld of Ghroth, as you play there are Worms of Ghroth spreading across the world leaving nothing but complete destruction as they pass by. You start the game with only one worm but as the game progresses more will spawn to ruin your day or make your day as they obliviate the world around them and release power from the areas they have destroyed in doing so. 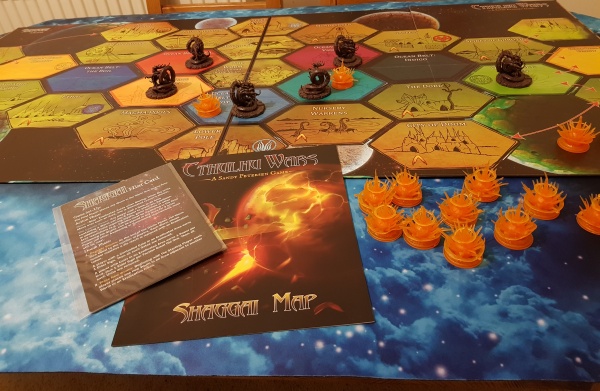 The board is made up of hexagons which is meant to represent the insect life that originated on Shaggai but in doing so gives you a good choice of movement directions. So this board adds a lot of varrience to a game that with the expansions already gives you a lot of choice in play.

The game can be ended early if too much of the board is destroyed by the worms. If this happens the winner is the one who has the highest doom track total.
What’s not to love, more map choice, a world being destroyed around you and the chance to destroy your fellow Old ones.

Order your copy of this at: https://www.bgextras.co.uk/cthulhu-wars-shaggai-map-i3333.htm