Scythe is probably one of the best games to come out in recent years, with it’s depth of play that
enables you to adapt your play and strategies through out the game, with your aim to be finishing the
game with the more victory points than your opponents. Due to the many ways to get the victory points
it already has so much playability in it, then you add the extra factions from the “Invaders From Afar”
expansion, the airships from the “Wing Gambit” expansion and all the extra modules that can be added
from the “Rise Of Fenris” campaign expansion and it just gets better and better. Then they bought out
this expansion and the game is now even more awesome than it was. 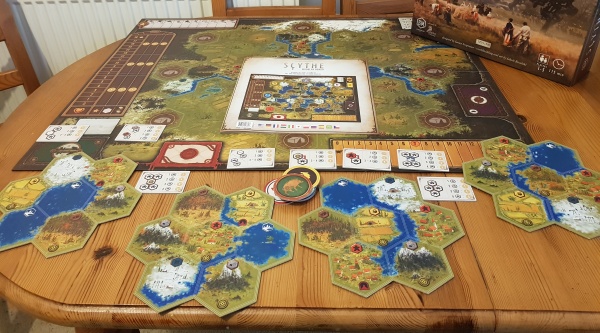 The Modular Board adds a new element to the game. You get a double sided main board, four double
sided smaller tiles each one different but all of them made up of seven hexagons. As each one also has
different placement of resources this totals to a lot of variation from one game to the next. Add to this
that each faction is also blindly placed on the board and it adds even more variations. You also gain eight
structure bonus tiles to add to those already in the game (what! Even more variance I hear you ask)
You can use the Modular Board with all of the other expansions and if you like to play using automata
decks then you can increase difficulty by placing them on a starting space that isn’t closed of by a body
of water and let them get a foot hold faster. Also if you didn’t know, you can buy more automata decks
to add more robot players to your play.

This is a great expansion from Stonemaier Games is well worth adding to your game. If you don’t have
the game, then I would highly recommend it and then buy this expansion too. You can order it now at: https://www.bgextras.co.uk/scythe-modular-board-i3757.htm