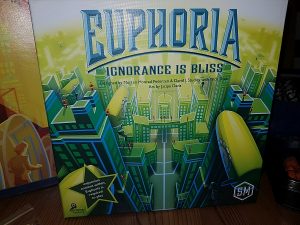 This expansion is more of an upgrade than an expansion, but a very good one. If you are reading this blog then I hope you know how to play Euphoria. If not it might be a good idea to find out how to play it before reading any further (There is a blog I wrote about Euphoria on this site)
There are stickers in the box that changes the tunnels so that the number of players playing sets where along the tracks the miner meeples start at. This means that with fewer players you don’t spend too much time opening the tunnels, which will speed the game up. If you are not a fan of putting the stickers on the board, you can buy a new board that has the new adaptions already on it.

The expansion adds new Recruits (not to be mixed with the originals, but to give you two decks to choose from) to make things more interesting six of the recruits are so powerful they were made factionless to bring them more in line with the other recruits but in the early part of the game they can make a huge difference. You can only have one of these in your start hand, so if you are dealt two or more you discard the extra cards and pick up another card. This adds so much more playability to the game. There is also a new rule that if you don’t have recruits that shares a faction with the most players or factionless, then you get two resources of your choice to start with as a starting bonus.

There are also player mats added, you now have a way to organise your components in front of you. The tracks for your knowledge and morale are also now on the player mats, so it’s easier to keep an eye on your workers, to help keep them stupid and happy. 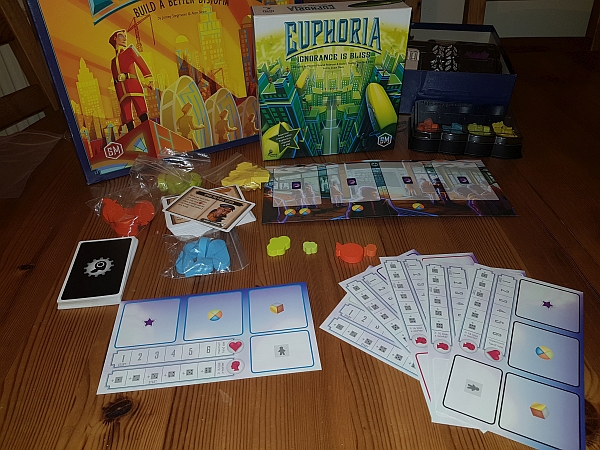 A new Antiques bazaar is added to open up the artefacts and make it easier to get the ones you need (even though you might have to pay resources for the pleasure) and talking about resources there are now large tokens to represent five of the smaller ones, which means you no longer have to use the multiplier boards.

There are also a couple of rule changes, an automata deck and amazingly it all still fits in the original Euphoria box (especially if you have the new insert trays)
I wasn’t expecting an expansion that improves an already great game, but that is what we have here.

You can order it here.