With the Euphoria expansion Ignorance is Bliss, we take a look at two extras available for those who already have the Euphoria board game (note these are included in the new 3rd print run edition of the game coming in May) 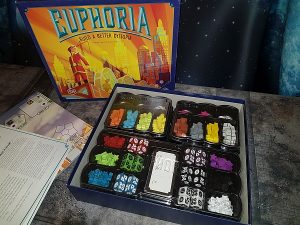 This set of trays has four trays, one large one that fits in the bottom of the box, one that’s half the size but has a fitted lid and two half again the size also with fitted lids. The large tray holds the cards and build tiles, the next size holds the player pieces (dice, stars, intelligence marker and the moral marker) and the final two hold the resource counters and other board markers. 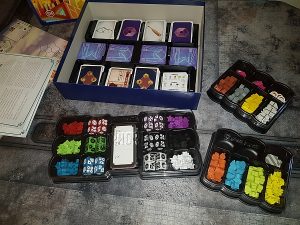 The trays make set up and set down easier as the counters are in trays that can be placed on the table and used during the game, and all the game components are in easy to find places.
They have left room in the trays for the expansion which comes out very soon. 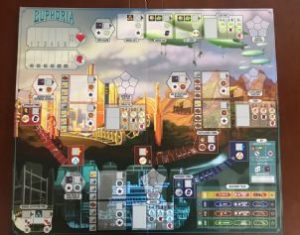 In the upcoming expansion there is a sticker to slightly alter the board. Some of us get a bit nervy about placing stickers correctly on boards, so there is a replacement board available so that you don’t need to do any sticker placing at all if you’d rather not.

You can find both of these and indeed the expansion on our website at: https://www.bgextras.co.uk/euphoria-board-game-c237.htm