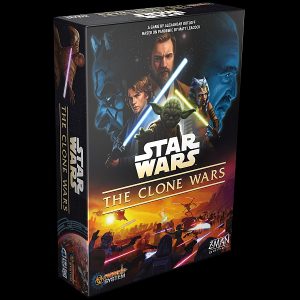 Imagine you’re a prominent Jedi, fighting the resistance to protect the rights of the people to fair trade deals throughout the realm. Now you can be one of a select Jedi team doing so! Hold on to your seat and have fun! 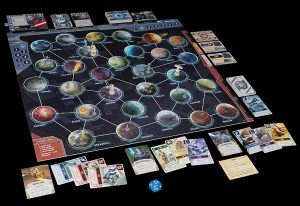 Z-man Games are well known for it’s Pandemic games and the different style of games that can come from the basic engine. This is one of them, a wonderful game that gives you a very fun experience that is also very enjoyable in it’s charm and like none of the other Pandemic games in how it’s played.  This game has the right feel for Star Wars, it does not feel like an add a label game. You are playing as a team in a cooperative game to beat the separatest who are Darth Maul, Asajj Ventress, general Grievous and Count Dooku, all of which have a figure to represent them. The heroes are by Aayla Secura, Obi-wan Kenobi, Luminara Unduli, Mace Windu, Anakin Skywalker, Yoda and Ahsoka Tano.
The game is set during the Clone Wars (hence the name of the game) You are trying to bring the end of the Clone Wars about. You do this by fighting Count Dookus Android army’s and opening any blockades that might be being used to further the seperatest cause. 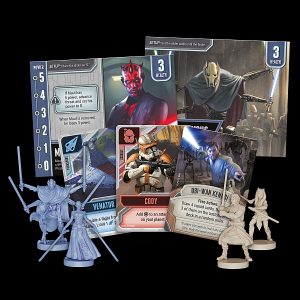 As a team You move around the board fighting droids and opening blokades as well as stopping the evil plots of your enemies across four exciting scenarios, as well as beating you’re evil enemies at the same time.
If you enjoy playing games in the Star Wars universe and also enjoy playing games were you work together to overcome adversaries, this is a must for you!  You can order it at: https://www.bgextras.co.uk/pandemic-star-wars-clone-wars-i6002.htm