This expansion adds the Sanctum Sanctorum to your terrain for your heroes to battle around.
As usual this building of Arcane importance is easy to assemble and paint. The Model is beautifully cast with loads of cool features.
you can recreate the battle against Black Dwarf and Ebony Maw against Ironman, Dr Strange and Wong. 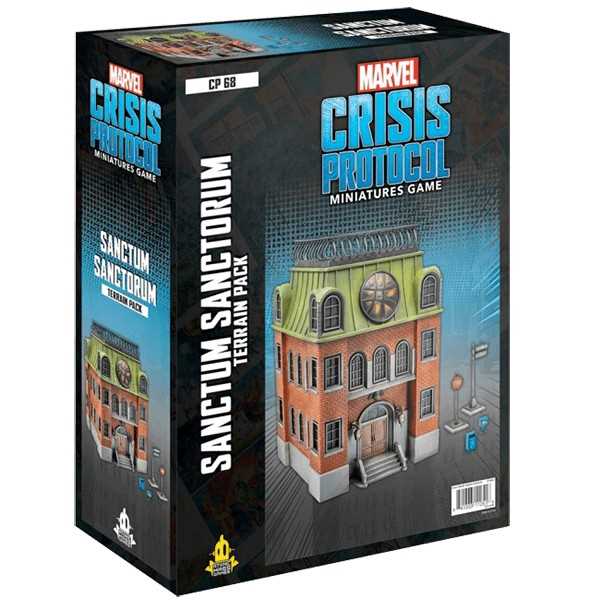 I thought some information might be useful…
The title “Sanctum Sanctorum” is often used to describe the entire building, but more specifically it can refer to the third
floor meditation chamber with access to Window of the Worlds.
The mansion of Doctor Stephen Strange is located at 177A Bleecker Street, New York City, NY 10012-1406, on the corner
of Bleecker Street and Fenno Place in the heart of Greenwich Village. Also known as the Sanctum Sanctorum, the townhouse
has served as the personal residence of Doctor Strange and formerly as the headquarters of the Defenders and the New Avengers.
It is also the greatest concentration of occult esoterica and mystical phenomena in existence.
The location itself appears to be a focal point for mystical energies with a nerve center of dragon ley lines running beneath
foundations, the veins of magic running through the Earth. Years before any permanent Western European settlements, a powerful
Native American Indian Shaman cursed the land to bind the chaos-entity Tyanon to that place and bar her full access to Earth.
The site continued to serve as a place for arcane Native American Indian rituals. Shamans of the Wappinger tribe were known to
journey here for vision quests.
With the arrival of European colonizers, the site became used for pagan sacrifices. Before any permanent structures were built
on the land, it was used as a Potter’s field: a mass grave for paupers and inmates from New York’s first penitentiary, Newgate
Prison. It is unclear who first built on the site, but it housed a Satanic cult that performed human sacrifices. The original
structure was destroyed in a fiery blaze, as were the subsequent five buildings on the same plot of land. Over the years, the
various buildings were used as a flophouse for beatniks, a notoriously bacchanalian speakeasy, a failed nunnery, and the lair
of a Puritan witchfinder who tortured immigrants in the basement. The current structure is actually the seventh building
constructed on this site. Its architect and details of its structure remain shrouded in mystery, and the building itself
continues to grow and change.
Before being purchased by Doctor Strange, the dwelling gained the local reputation of being haunted. It was the structure’s
supernatural aura that originally drew Doctor Strange to it when beginning his practice of the mystical arts. Before claiming the
mansion as his Sanctum, Strange rid the building of Tyanon and imprisoned her familiar.
The Sanctum Sanctorum is warded by powerful spells cast by Doctor Strange on drawing on the inherent mystical energies of the site.
Additionally, Wong serves as a loyal manservant to Doctor Strange and runs the duties of the home. Although it was once destroyed
in subsequent battles with the Lilin and the Fallen, it has since been restored.
During the end of Civil War and throughout Dark Reign, an illusion disguised it as decrepit and condemned (soon to be replaced by a
Starbucks). This was to protect Strange and the New Avengers, who were using it as a secret base in which to hide from their enemies
and from the government-sanctioned Mighty Avengers. After Fear Itself, it was shown to be restored, with Strange and Wong living there
openly once again.
The Sanctum Sanctorum is a three-story Victorian-style brownstone townhouse built in the French Baroque architecture design with a
Mansard roof. Due to its mystical nature, the exact dimensions of the Sanctum Sanctorum are variable allowing the building to seem more
spacious on the interior. Additionally, furniture, doorways, corridors, and even entire rooms will move creating a labyrinthine distortion
of time and space.
In the MCU Cinematic universe
In the MCU the Sanctum is not one, but three different buildings. Each occupying a sight of great power where great cities now occupy,
New York, London and Hong Kong. The New York Sanctum is only one of three created by Agamotto and maintained by the Masters of the Mystic
Arts. Along with the London Sanctum and the Hong Kong Sanctum, the New York Sanctum acted as a planet-wide mystical defensive ward and as
a base from which the Masters of the Mystic Arts conducted their activities. Each building has a central circular window with a logo
composed of four slashing curves arranged differently. It has a fixed dimensional portal connecting it to Kamar-Taj in Nepal and a more
conventional entrance on a busy street of Manhattan in Greenwich Village. Following the death of Master Daniel Drumm at the hands of
Kaecilius and his Zealots, Doctor Strange became the new master and guardian of the New York Sanctum. After being altered due to the return
of Loki to Earth, Doctor Strange summoned Thor to the Sanctum in order to get them both off of Earth. With Doctor Strange’s assistance,
Thor and Loki were reunited with Odin in Norway. When Hulk was sent back to Earth by Heimdall channeling dark magic, he landed in the New
York Sanctum with a warning that Thanos was coming. Not long after Banner’s arrival, Ebony Maw and Cull Obsidian arrived in their Q-Ship demanding the Time Stone.
You can order this at: https://www.bgextras.co.uk/marvel-crisis-protocol-sanctum-sanctorum-terrain-i5192.htm