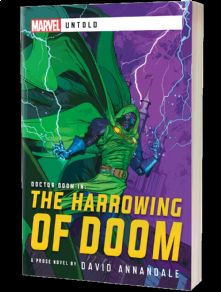 This Novel is about Victor Von Doom, he uses magic combined with science
to make himself one of the most feared villains in the Marvel worlds.
Doctor Doom made his debut in The Fantastic Four #5 (July 1962).The
monarch of the fictional nation Latveria, Doom is usually depicted
as the archenemy of the Fantastic Four, though he has come into conflict
with other superheroes as well, including Spider-Man, Iron Man, Black
Panther, Doctor Strange, the X-Men, and the Avengers.
This novel is about his continual fight with the demonic figure of Mephysto
for the captured soul of his mother. He has lost every time so far. Things
will be different this time, he is determined to defeat Mephisto once and
for all! So Victor Von Doom sets out on a quest for help. Will he succeed?
Or will he lose his soul instead
This is yet another great story set in the Marvel world.

I can highly recommend all of these books!  Find this and more Marvel novels at: https://www.bgextras.co.uk/marvel-o92.htm