There are a lot of expansions for Cthulhu Wars. Rather than try and cover them in 1 big blog, we are going to seperate them out into two blogs. While the first one focused on the extra player factions, this second one focuses on the neutral expansions.
Neutral faction – Azathoth 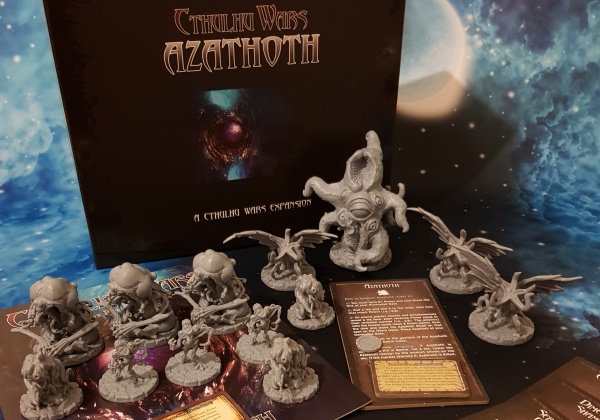 This is a Neutral faction, which means that this is an extra faction and the first player to summon one of
the four monster types associated to this faction or awaken Azathoth has control of that unit’s loyalty
card. Which means until all that monster type has been wiped off the board only you can control them.
As well as Azathoth you get powerful monsters, Dimensional Shamblers, Elder Things, Star Vampires and
the Servitors of the Outer Gods.

Beyond time and space 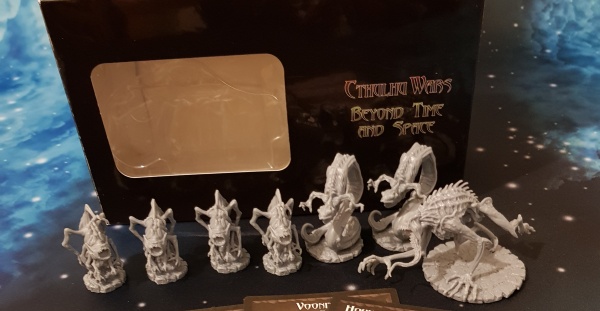 This is another independent faction that can be added to any Cthulhu wars game.
“Vooniths are an “amphibious horror” referenced by Lovecraft in his tale, The Dream-Quest of Unknown
Kadath. Pretty much nothing else is known of them. The design of the Voonith upon sirens and
amphisboenas – these are existing amphibians & reptiles who only have forelegs. So the back half of the
Voonith is long & eel-like, while the front part has claws and fangs. The model shows it rearing up, ready
to strike. They cost 3 Power, and only have 1 Combat, which may at first seem puny, but wait, there’s
more!
The Voonith is a solitary hunter, and I wanted the in-game version to foster that concept. Therefore, its
special ability is that if you roll NO kills in a battle involving your Voonith, add 1 kill to your total. Because
of this, the Voonith’s 1 combat die isn’t actually a drawback. If you have 2 Vooniths and roll no kills,
you’d get 2 kills for free. And yes, if you have 2 Vooniths in Battle and roll only 1 kill, you get a free kill for
your deficit. Basically, each Voonith you have provides a guaranteed kill!”
—description from the publisher

There are three types of monster in this faction, wamp x 4, Voonith x2 and Hound of Tindalos x1.
Like all of the Neutral factions they make the game that much more complex but also gives you so much
more playability.

This is another neutral faction. Available to any player as long as they get there first and have the the
doom points to spend. This faction can be added to any Cthulhu Wars game. This faction contains strong
monster types as well as Dhole (Destroyer of Worlds) there are the Great race of Yith and the Demonic
Quachil Uttaus entity, Treader of the Dust.# 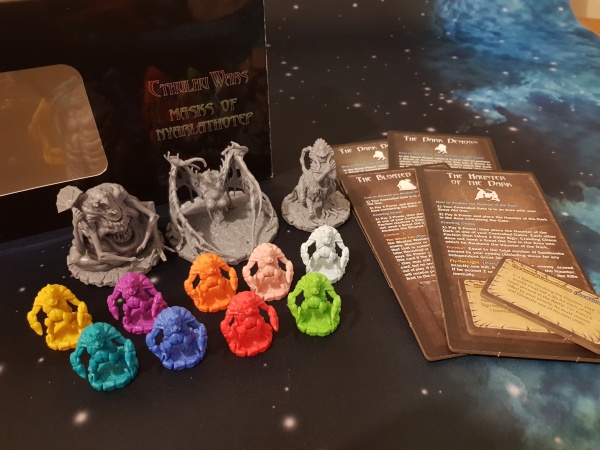 As the publisher puts it so well, I’ll start with their explanation.

“The multiplicity of the Crawling Chaos!
Components:
 9 Dark Demon Miniatures
 9 Loyalty cards
 2 Spellbooks
 The Shadow Pharaoh figure
 The Bloated Woman figure
 Haunter of the Dark figure
The Dark Demons
The dark demon is a form of Nyarlathotep which manifests itself by literally engulfing and transforming
his summoner. When the avatar departs, the victim’s body is left transformed, forever a hideous
monster. In the box, we provide Dark Demons in every faction color: nine total figures! When you recruit
the Dark Demon, all the enemy factions also get one, but theirs is a burden and weakness to them, while
yours is more of an asset.
The Shadow Pharaoh
This manifestation is Nyarlathotep’s Egyptian connection, well-known from many stories. The figure itself
is a sort of combination of sphinx, scorpion, mummy, pharaoh, and tentacled horror. I really like it, and I
think you will too. It has an especially nasty ability which drives cultists off gates, making the gates
vulnerable to be captured once the Pharaoh leaves.
The Bloated Woman

First popularized in the well-known adventure Masks of Nyarlathotep for the Call of Cthulhu system, the
Bloated Woman is Nyarlathotep in a rather repulsive female form. She steals killed enemies, and later
transforms your gates so they produce Elder Signs rather than Power.
The Haunter of the Dark
The Haunter of the Dark is a full-on Great Old One. It is awakened as with most independent Great Old
Ones – you need a Gate with your own Great Old One. In the Haunter’s case, you spend 6 Power to get
the loyalty card, putting it in the same high-end category as game-changers such as Atlach-Nacha,
Cthugha, or Daoloth. (Most Independent Great Old Ones only cost 4, or even 2.)
If you’re Crawling Chaos, you can awaken the Haunter for just 5 Power, and you don’t need a Great Old
One, so obtaining it is a lot easier, BUT every other faction does get an Elder Sign when you do this.
The Haunter is explicitly a combat critter. It has a combat of 1 per enemy spellbook (so in theory 0-6, but
in practice usually at the high end). I wanted to reflect the fact that one of the Haunter’s best-known
characteristics is that it can’t survive well in the light. Therefore, it actually starts with a weakness,
representing this disability – Fly The Light. This “ability” states that post-Battle, if the enemy scored only
1 Kill, it MUST be applied to the Haunter. If the enemy scored 2 or more kills though, you can target them
normally.
The Haunter’s spellbook is really easy to get – just spend 1 Power as an action. Trivial. In fact, normally
this is the first thing you’ll do after awakening the Haunter, which gives your enemies a one-turn window
to try to take it out, before you get this frightful pre-Battle ability. It’s The Shining Trapezohedron. Before
rolling combat dice, your enemy has to roll 1 die per unit he has in the battle. For each Kill he rolls, he
must eliminate a unit (his choice).”
—end of description from the publisher

As you can see this is a complex expansion that would be best played by experienced players. Saying
that this expansion adds so much to the game play and is a good one to add.

You can find these and more Cthulhu Wars expansions on our website at: https://www.bgextras.co.uk/cthulhu-wars-c344.htm