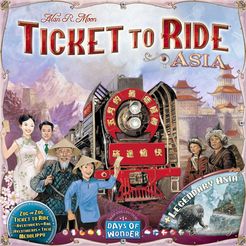 Ticket to Ride Asia is the first map collection for Ticket to Ride featuring a double sided board.  One side is Team Asia, the other side is Legendary Asia.  We will take a look at Team Asia first:

Embark on an incredible adventure in Alan R. Moon’s Team Asia map as you and a partner compete against other teams on a 25,000 kilometer ride from Kabul to Beijing, through the steppes of Mongolia and the Gobi desert up to the Yellow River!

Or, if you prefer the quiet pleasures of traveling alone along the Silk Road, or winding your way through the hustle and bustle of Indochina, venture into the forbidden eastern lands of Francois

Valentyne’s Legendary Asia. Just be ready for a hair-rising ride through the mountain passes of the Himalayas.

The main change in this set-up is that some of the routes through Asia are labeled mountain routes, with one or more spaces on the route bearing an X. Whenever a player claims one of these routes, she must place a train from her reserve in the Mountain Crossing area of the game board, earning two points for each such train but losing access to them for the rest of the game. The player who connects to the most cities in a single network earns a ten point “Asian Explorer” bonus. Available here.