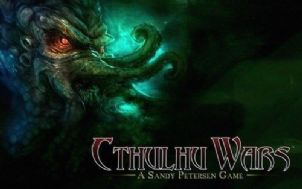 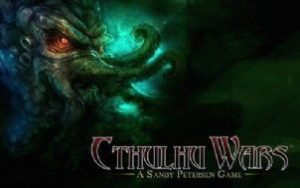 The Old Ones have risen. Monsters walk the Earth. Humanity is finished but the struggle continues. Which Great Old One will rule the ruins of Earth? Now, you take charge!

Cthulhu Wars is a strategy board game in which the players take the part of alien races and gods taken from the Cthulhu mythos. The game takes place on a map of Earth. Each player takes the part of one of four factions included in the base game. Earn and cast spells and summon monsters unique to your own Faction. Each Faction is strikingly different in tactics and techniques. A strategy that works for the Black Goat will be ineffective for the Crawling Chaos.  At the start of a turn, players Gather Power then, during a series of action rounds, they spend this power to accomplish various tasks, such as recruiting Cultists, moving units, engaging in battle, summoning monsters, building gates, casting spells, and awakening their Great Old One. When all players run out of Power, the Action phase ends and the next turn begins. Victory is determined by accumulating points on the Doom Track. The first player to 30 is the lone victor if he has unlocked all six of spell books.

The game is for 2-4 players… up to 5 if you get one of the expansions. Each Faction has multiple unique strategies for winning, so Cthulhu Wars has incredible depth and replay value. 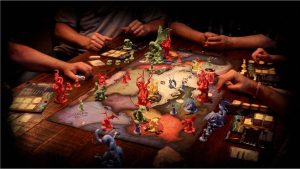 Cthulhu Wars includes no less than 64 high quality fully assembled plastic figures.  These range in size from your regular cultists which are 40mm tall to the old ones such as Hastur, Cthulhu which are anything from 110 to 180mm tall!  Cthulhu Wars is a combination of strategic gaming and Lovecraftian horror with stunning miniatures to make the game even more fun. Available here.