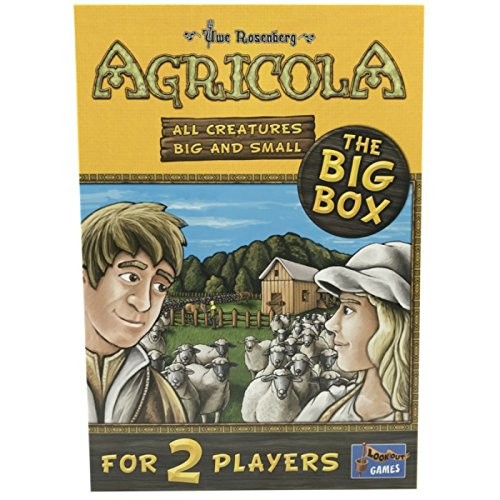 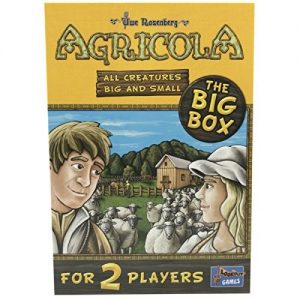 Agricola: All Creatures Big and Small is a new take on Uwe Rosenberg’s Agricola designed for exactly two players and focused only on the animal husbandry aspect of that game. So long plows and veggies!

In Agricola: All Creatures Big and Small, you become an animal breeder of horses, cows, sheep and pigs and try to make the most of your pastures. Players start with a 3×2 game board that can be expanded during play to give more room for players to grow and animals to run free. Sixteen possible actions are available for players to take, with each player taking three actions total in each of the eight rounds.

The player who amasses the most victory points through enclosing space with fences and acquiring the largest number and variety of animals and victory point-generating buildings will be the winner.

The first expansion Agricola: All Creatures Big and Small More Buildings Big and Small gives you 27 new buildings for use with the base game as well as a fifth Stall tile and a farm expansion. The 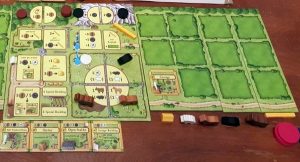 buildings here include among others the Dog House allowing you to keep a sheep in an unused space aware from forests.  The cattle farm allows you to change 1 animal for 1 cow when you add an exapnsion.  The farm shop guives you a resource and an animal of your choicse

Regards the second expansion the big box only contains the extra buildings from the orignal Agricola: All Creatures Big and Small – Even More Buildings Big and Small as the extra stall and farm expansion aren’t needed as you have the ones from the first expansion.  The 27 buildings from this expansion vary a lot.  For example the Steward’s Office enables that player to take a fourth action every go, but costs you 3 points at the end of the game.  The cattle market allows you to trade a reed for an animal.  While the manor gains you 7 points but you lose 2 points for each building adjactent to the road. Available here.