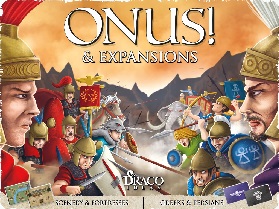 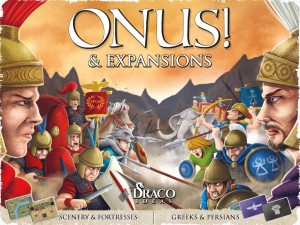 Have you ever dreamed about commanding a powerful army? Ever imagined leading an army which included riding elephants over the Pyrenees and the Alps to try and conquer Rome? Do you enjoy a good historic novel dated back to the old Republic of Rome and would like to travel back to that time? IF you answered yes to any of the following questions then you will love playing this game!

ONUS! Is a war game where both sides are fighting an old aged battle. The game is based on the II Punic War mainly. However, Battles from the third to first B.C centuries could be implemented. The game concept combines both orders and events cards which results in each game being different and each combat unpredictable and exciting.

Units are represented by cards which have been scaled up to a Centuria (century) or to a Maniple (Manipulus), representing formations from 0 to 100 men for Infantry units, 20 cavalrymen for Cavalry units or 6 elephants. They have their own set of traits to represent permanent attributes of the unit like Melee Combat, Range Attack, Defensive capacity, Morale and Life, and Movement capacity. Each set of traits get bonuses and penalties depending on the ongoing situation and combat engagement. Units also have their own unique set of skills to represent specific abilities which they are able to perform. These can be thing like defensive formations to extremely effective techniques to attack enemies. Some of these skills need to be activated, meaning only one of them can be used in an engagement, while others are inherent to the units. 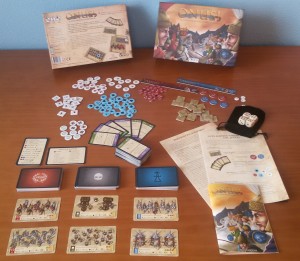 Leadership is also represented in this game by the figure of the General. A Generals token represents his HQ and its own escort. In addition to the leadership role. A General grants bonuses to nearby units. This boosts the morale of the troops which means providing additional benefits when they are engaged with the enemy in those bloody encounters. Both Hannibal and Scipio (two well-known Generals) are included in this game with their unique set of bonuses! Available here.

This game is from a kickstarter project and we have the full kickstarter version available for preorder.