Since the release of the original Dixit card game, there have been several expansions released to extend the fun and trickery of this storytelling game – Dixit 2 (Quest), Odyssey, Dixit 3/Journey.

After you have played Dixit a number of times then you may be getting a bit used to the same cards being played especially if it is the same group playing.  This is where this first expansion comes in, (also known as Dixit Quest in America and Canada).  While, it can be played on its own you would need your own voting tokens and paper and pencil to keep track of scoring. So it is best used as an expansion to the original game.

Are you ready to take on this quest? Available to buy here

The 2nd expansion, can be played on its own or with the original game. It contains 84 new cards as well as including extra components allowing for up to 12 players to play the game. The box, that this expansion comes in, is also big enough to hold at least 2 other decks of cards so you only need to take this one box around with you, even if you have two other sets of cards.

While the cards are by a different artist, they are still similar in style, perhaps a little darker. The exciting thing about this expansion is the ability to play with not just 6 players but anywhere up to 12.  With so few games on the market that go past 6 players, this is ideal for those days when everyone turns up to play.

Are you ready to go on an odyssey? Available to buy here

This 3rd expansion, actually comes in two forms. The standalone game is Dixit Journey, while the expansion featuring just the extra cards is Dixit 3. 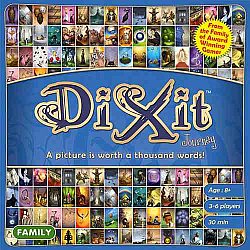 Dixit Journey is a standalone game that doesn’t require the original game. The main differences are:

Are you ready to go on a new journey? Available to buy here

Dixit 3 includes the same cards as in Dixit Journey, so if you already have either Dixit Odyssey or the original Dixit. You can just pick up this pack and add 84 brand new cards to your game to keep it fresh.

Are you ready to journey into new worlds? Available to buy here