For fans of the Star Wars card game the first extra deck cards have been released starting with The Desolation of Hoth. This is the first set of deck cards that will be released by Fantasy Flight Game as part of The Hoth Cycle. This story deck follows the film The Empire Strikes Back where the Rebels have based themselves on the Hoth ice world to hide from the Imperial Forces. However the extreme cold can only help the Rebels escape detection for so long and this is where the game kicks in with the arrival of the Imperial forces.

The Rebels have the upper hand in terms of being in the colder climate for longer and having adapted their equipment already. Can the Imperial Forces play catch up and adapt their equipment in time to make their assault and prevent the Rebels escaping. The Desolation of Hoth deck cards begins this part of the story with Rebels looking to establish their base on Hoth and control as much as the planet as possible prior to the Imperial Forces arriving. This is played out via the Objective Cards, which players use to determine their focal points of attack and defence in the game. 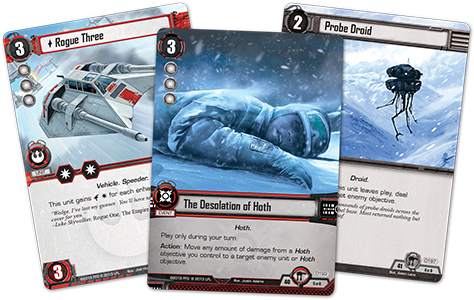 Players from both sides receive Units like droids and snowspeeders applicable to the conflict and enhancements like Survival Gear for the extreme cold temperatures. There is a new Fate card, introduced to this card game, which will provide interesting twists to the battles for either side depending on their intent. This helps to create dynamic games between players each time they play. As well as being able to further extend the story as new card decks are introduced.

Are you ready to begin the battle for Hoth? The Desolation of Hoth available to buy here

Did you know you can protect the cards and preserve playing your favourite card game for longer with Card Sleeves? Available to buy here

Worried about missing out on the extra force decks as they are released – The Search for Sykwalker, A Dark Time, Assault on Echo Base, The Battles of Hoth? No worries subscribe here and save over £1 per pack as well