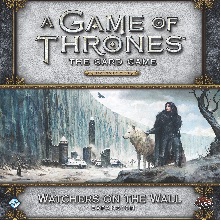 The 3rd deluxe expansion for A Game of Thrones the Card Game 2nd edition.

The men of the Night’s Watch have only one sworn duty: to defend the Wall and protect the Seven Kingdoms. Even when the Night’s Watch is drawn into the intrigues and power struggles that define the game of thrones, they play the game much differently than the Great Houses of Westeros. In fact, most of their power comes not from winning challenges, but from defending The Wall. The Wall gives you a significant source of power, but defending it against a concerted enemy assault can be difficult. Fortunately, Watchers on the Wall gives you the tools to strengthen your defences, beginning with a new version of Jon Snow

Although the focus of this expansion rests on the Night’s Watch, you’ll find two new non-loyal cards for every other 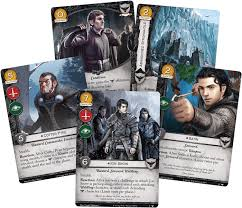 faction, expanding your options for any alliance. You’ll also receive an assortment of neutral cards portraying the Night’s Watch’s most common enemies, the Wildlings. With seven new plots (one loyal to the Night’s Watch) rounding out the expansion, Watchers on the Wall offers new pathways to victory for every deck.

The men of the Night’s Watch take no wives, hold no lands, and father no children. They wear no crowns and win no glory. They live and die at their post. Night is gathering, and your watch will soon begin. Available here.