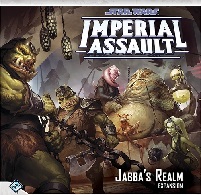 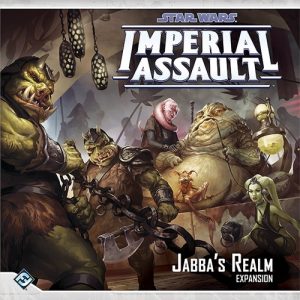 Imperial reprisals have swept the galaxy, targeting not just the Rebels, but their families and loved ones as well. In desperation, you and a team of other Rebel operatives have gathered as many refugees as you can in hopes of shepherding them to safety in the Outer Rim. Your escape is discovered, however, and you’ve been shot down on Tatooine. Here, the power of the Empire is not as strong as elsewhere—but that doesn’t mean you’re out of danger. This is the domain of Jabba the Hutt, and you’ll need to play by his rules if you want to survive.

Jabba’s Realm is a new expansion for Imperial Assault that offers a wealth of new content for your campaigns and skirmishes. You’ll find an entirely new full-length campaign that challenges you to survive among the desert wastes and criminal underworld of Tatooine, even as new skirmish missions invite you to battle in the Nal Hutta Borderlands or around the fabled Pit of Carkoon.

Three new heroes join the Rebellion in this expansion, each ready to fight the Empire in their 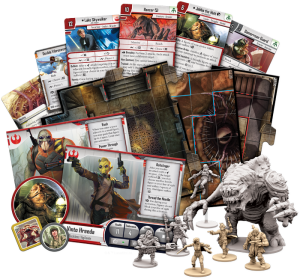 own unique way. Shyla Varad is a Mandalorian warrior, renowned for her skill with blade and whip, and eager to practice her warrior traditions against the Empire. Vinto Hreeda, on the other hand, is a reckless vigilante and gunslinger—an expert sharpshooter who has plenty of grudges to bear against the Empire. Finally, the Rebels gain the allegiance of Onar Koma, a hulking Aqualish bodyguard with an almost unmatched strength in battle.

With your ship shot down on Tatooine and your lives in danger at every turn, you have a choice to make. Will you work with Jabba the Hutt in exchange for his protection? Can you serve the Rebel Alliance and a crime lord at the same time? Whether you’re playing a campaign or a skirmish game, the Jabba’s Realm expansion will change your games forever. Available here.