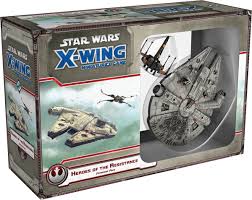 What do a desert scavenger and a fugitive Stormtrooper have in common with an iconic war hero and the galaxy’s greatest pilot? They are all coming to X-Wing in the Heroes of the Resistance Expansion Pack!

Rey, Finn, Poe Dameron, and the heroes of The Force Awakens fight for freedom with the Heroes of the Resistance Expansion Pack for X-Wing. Featuring new sculpts for the Millennium Falcon and Poe Dameron’s black-and-orange T-70 X-wing, Heroes of the Resistance also expands your fleet with three unique X-wing pilots, as well as new versions of Han Solo and Chewbacca. Meanwhile, the pack’s eighteen upgrades introduce new elite pilot talents, Tech upgrades, and unique title upgrades for both the Millennium Falcon and Black One.

In addition to its new starship miniatures, Heroes of the Resistance introduces ten ship cards 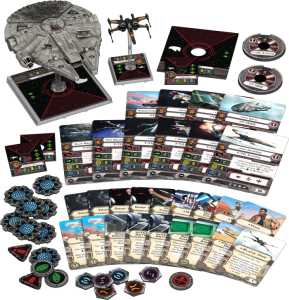 and eighteen upgrades, plus all requisite manoeuvre dials and tokens. These include a Poe Dameron with a pilot skill value of “9,” ship cards for both Han Solo and Chewbacca that feature new pilot abilities, three new unique Resistance X-wing pilots, new elite pilot talents, new Tech upgrades, and unique title upgrades for both the Millennium Falcon and Black One. Among other things, X-Wing has earned a reputation for the high quality of its pre-painted miniatures. These miniatures transform your games into richly immersive Star Wars experiences, and the new T-70 X-wing miniature in Heroes of the Resistance adds to your experience by allowing you to fly Poe in his custom black-and-orange fighter.

No matter whether you are a new player, just joining the game with The Force Awakens Core Set, or you’re the grizzled veteran of a hundred dogfights, Heroes of the Resistance expands your game with myriad new options, even as it honours and reinforces all of the most important elements of its design. Join the fight against the First Order!

Heroes of the Resistance can be played with 2-4 players aged 14+ with an estimated time play of 30 minutes. Available here.