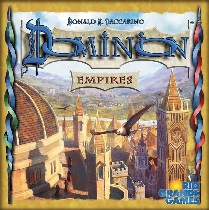 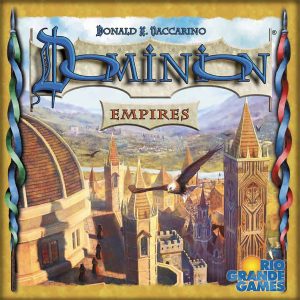 You can feel it in the night, like an approaching storm. You hear its distant laughter on the wind; you catch a glimpse of it in the window of a passing train. There’s no mistaking it. It’s another Dominion expansion.

The world is big and your kingdom gigantic. It’s no longer a kingdom really; it’s an empire. Which makes you the emperor. This entitles you to a better chair, plus you can name a salad after yourself. It’s not easy being emperor. The day starts early, when you light the sacred flame; then it’s hours of committee meetings, trying to establish exactly why the sacred flame keeps going out. Sometimes your armies take over a continent and you just have no idea where to put it. And there’s the risk of assassination; you have a food taster, who tastes anything before you eat it, and a dagger tester, who gets stabbed by anything before it stabs you. You’ve taken to staying at home whenever it’s the Ides of anything. Still overall it’s a great job. You wouldn’t trade it for the world – especially given how much of the world you already have. 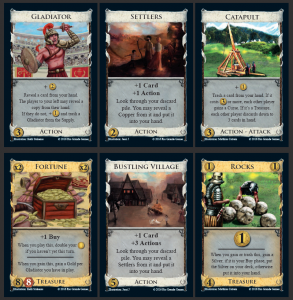 remove VP tokens from their piles. New Event cards much like the ones introduced in Adventures. These can be bought during the buy phase using buys a player has available. Also the concept of debt which allows a player to take on debt tokens as payment for specific cards within the game. These can be paid off at any time during a players turn using money. The catch is that a player isn’t allowed to buy any cards until he pays of his debt in full. Landmark cards are also a new edition, a maximum of 2 of which are added to the display and which provide in-game or end-game scoring opportunities. Some also penalize players for meeting or failing to meet certain conditions.

Dominion Empires can be played with between 2-4 Players aged 14+ and can be completed in around 30 minutes. Available here.