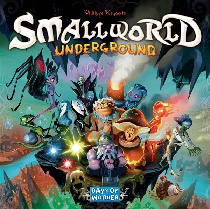 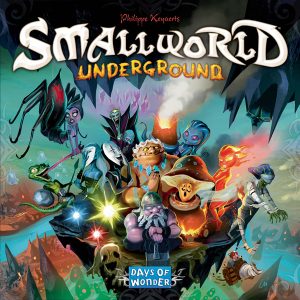 Small World Underground includes 15 fantasy themes races of creatures along with 21 special powers. Some of the new races include:

Lost Tribes from the original game have been replaced by Monster tokens. Fewer regions are occupied by these at the beginning of the game, but instead of being on their own, they are always stacked in 2’s. However, once conquered, these regions reveal a randomly-assigned Righteous Relic or Popular Place, which stay on the board for the rest of the game, and confer a bonus of some description to their current owner. 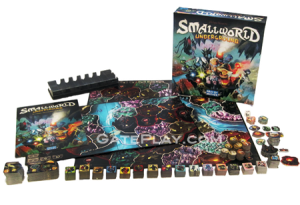 There is also a new feature of a river which is divided into several regions that runs down the centre of each map. This river cannot be occupied at the end of a turn (except by the Kraken) but it can be crossed at the cost of a single token, which is redeployed at the end of the player’s turn. The river can therefore be used as a semi-defensive line, as it will cost any player to cross it, although this cost is not prohibitive. As the river regions are quite long, it gives players the opportunity to stretch out across the map to attack opponents who may have felt that they were safely out of reach. This is a nice, simple addition to the gameboard, and certainly gives options for future races and special abilities.

Each player will control several creature/power combinations over the course of the game. They will be spending points to draft these combinations and will use those creatures to claim control of various subterranean locations. Some locations hold relics or are designated as “places of power” and monsters must first be conquered before a player can claim these special benefits. At the end of each turn, a player scores points for the regions they hold and the player with the most pints at the end of the game wins.