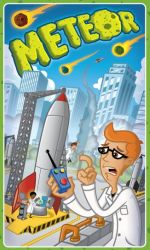 Meteors is a cooperative card game that requires you to work with your friends as a team to save Earth from a meteor storm. To prevent them hitting Earth you’ll be working with each other in real time by pooling together resources to build and launch rockets to destroy the incoming meteors. Otherwise in 5 minutes time Earth is doomed – no pressure!

Each player has their own set of cards – Rockets, Fuel Cells and Technology and a build area. Within the middle of the playing
area are meteor cards faced downwards to start with. The Rockets have values of 1 to 5 and need to be built first, one at a time, before they can be launched (one or more at the same time). Each rocket requires a specific number and colour of Fuel Cells for it be 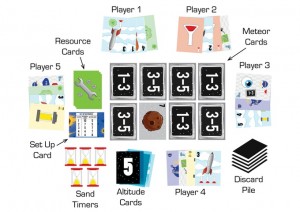 launched. The Technology cards allows players to perform additional activities that aren’t otherwise available during the gameplay. For example, even though it’s a cooperative game, players cannot communicate verbally with one another. The exception to this is once the Comm Satellite has been built this will then allow players to verbally communicate with each other and allow them to work more smoothly as a team. The Technology available to build also requires Fuel Cells.

On the communication side this does have a plus point in not being able to initially communicate with each as there’s no one player dominating what the other players should be doing, which can happen in other cooperative type games.

The build areas are used to build the Rockets and Technology, where the Fuel Cells are attached as when applicable. When building they’re known as projects and only one project can take place per build area. However the great thing is you can access other players build areas when not in use to start another project if yours is already in use. You can also discard your current project but you then lose the cards for this project – in particular the much needed fuel cells. This requires careful planning and making the right call at the right time, which can be very difficult and sometimes stressful when timing running out. However this will come more with experience with regularly playing the game so don’t worry too much to start with if you find yourself making the wrong calls on this and find yourself getting a bit frustrated.

Once the Rockets are built they can then be launched from the build areas – where you have to at least match the value of your rocket(s) to the value of the meteor looking to destroy. There are 2 types of ordinary meteors – small and large – plus also special ones that are much harder to destroy. The small meteors are grey with values 1 to 3, whereas the large ones are brown with values 3 to 7. Be warned if value of your rocket(s) is higher than the value of the meteor in destroying it, then the resulting blast causes the other meteors to accelerate towards Earth!  Not good at all when only 5 minutes to play the game in!

The time is counted via sand timers, where each one represents a zone – 5 in total (one per minute). The meteors start at the furthest zone and each minute they move to the next zone until the end of the final one when it hits Earth (if not yet destroyed). At the end of each zone players draw more cards although this eats in to the time, so don’t take too long. Players win if they destroy all the Meteors, however if one or more meteors hits Earth then it’s game over!

Meteors is for up to 5 players ages 12 and upwards. With the games being 5 minutes max this opens up opportunities to have several games in one session. This allows you and your friends to quickly get to know the ins and outs of the gameplay and become more used to working in such a short space of time together. There’s also several variations of gameplay within the rules to bring variety and longevity to this card game – Basic, Regualr, Advanced and Scenario Based games. Great fun, and perhaps stress to be had, when playing with friends. Plus there’s a solitaire option when wanting to play on your own.

Can you and your friends work together to save Earth in time?  Available here