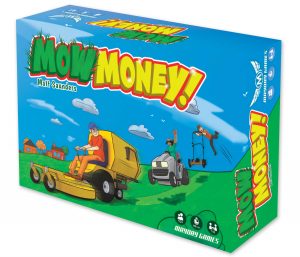 Walkerville, a landscaper’s paradise of green grass and lush yards. The mayor of Walkerville wants the best landscaping company to take care of all of the city’s luxuriant parks, awarding a lucrative contract to the company that earns the best reputation with the chance to rake in Mow Money for years to come!

Spring has arrived in Walkerville and the lawns are coming back to full life after the long, cold winter. In Mow Money, each player is a new landscaping company which is competing to accumulate the most reputation points. The property owners in Walkerville generally award contracts to companies that agree to work for the lowest pay, but sometimes having a good reputation will sway the auction in your favour. Through cunning management of bids and odd jobs, your goal is about earning the best reputation. While in this game reputation matters most, in the end, having a few extra bucks won’t hurt. Each player starts out with a push mower and a dream to win the city contract. Players will invest money to buy new lawnmowers and bid cards. Bid cards are used to win contract cards that are worth reputation points. 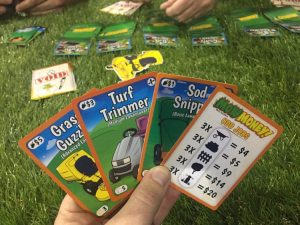 Setup the neighbourhood cards in alphabetical order with the contracts on top of each card in the middle of the table. Those cards are the jobs that players will compete for during the bidding phase. Bid cards will be separated into basic, medium and advanced piles above the neighbourhoods. Players begin with the basic mower and earn money through odd jobs and contract jobs to upgrade their mowers. Players can bid for more complex neighbourhood jobs with the medium and advanced bid cards once their mowers are upgraded.

Can you carefully manage your bid cards to undercut your competition and win the city contract? Mow Money can with played with a number of 2-6 players aged 10 or older and can be played within an estimated time of 45-60 minutes. Available here.