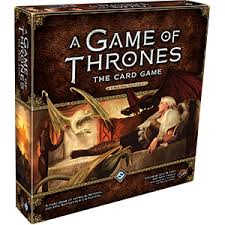 The world of Westeros is wracked with war, intrigue and strife. The Great Houses gather armies and meet in titanic battles, while their assassins and spies struggle in the shadows. Across the Narrow Sea, the first dragons in years have risen, while in the barren lands beyond the Wall, a nameless threat is stirring, eager to crush the world with the cold and endless night. Westeros is unforgiving of mistakes, and in the end, only one game matters – the game of thrones.

In the game, each player has two decks. A draw deck and a plot deck. The draw deck consists of the tactical elements of your struggle, including the characters, locations, attachments and events that you call upon in your attempt to claim the Iron Throne. You are able to command characters from throughout ‘A Song of Ice and Fire’, and march from the walls of Winterfell or gather your armies around Casterly Rock. You can even give your characters storied weapons such as the Valyrian still blades Ice or Widow’s Wail. The draw deck holds these powerful characters, locations, events and attachments. The deck is randomly shuffled and players draw their hands from this deck.

At the beginning of each round, each player in turn chooses and reveals one of the plot cards 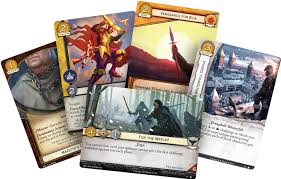 from their individual plot decks. Your plot for the round determines how much gold you can spend on other cards, which player starts with initiative and how powerful your challenges are. Your plot also bears a reserve value which determines how many cards you are allowed to keep in your hand at the end of the round. Plots may also offer powerful effects that can trigger when the plots are revealed or persist to shape the entire game round. You may scorch the earth with a deadly wildfire assault or call upon all players to support the faith of the Seven.

Your ultimate goal in this game is to gain influence over the greatest seat of power in Westeros: the Iron Throne. To achieve this goal, you must call upon iconic characters such as Tywin Lannister, Robb Stark, Stannis Baratheon, Daenerys Targaryen, Euron Crow’s Eye, The Red Viper and lots more. You must manoeuvre the members of your House and your allies in a constant battle to gain power. The first player to claim fifteen power wins!

A Game of Thrones the card game is a living card game.  The core set starts you off at the beginning of the Song of Ice and Fire story. Then over time more decks and expansions are released that allow you to go further through the story. You will gain new characters, or a new card for a character showing how he has developed since the start of the story.  Also new plots and other cards will be available.

Your path leads towards the Iron Throne, but only the greatest commanders and most cunning schemers will succeed in reaching their goal. Call the banners of your House and prepare to battle for the future of Westeros in “A Game of Thrones – The Card Game Second Edition!”

A Game of Thrones: The Card Game (Second Edition) will play 2 – 4 players with a suitable playing age between 14+ years old and can be played for anywhere between 1 and 2 hours.