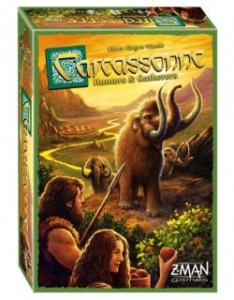 In Carcassonne Hunters and Gatherers it’s set in the time of the Stone Age, where we were previously hunters and gatherers. This is a standalone version of Carcassonne, very similar to the original game and for those that have played it you’ll find the gameplay quite familiar. The main differences are forests instead of cities, streams instead of roads and hunters & gatherers instead of farmers.  This is a re-print version with updated graphics otherwise exactly the same as previous print versions.

For those not familiar with the game play this is a tile-laying game, where each turn players draw a tile and place it down alongside other tiles already placed (and where it applicably fits). Each player then has the option to place their meeples (tribe members) to control the feature within the tile just placed down – whether that is a forest, stream or countryside. Bear in mind you only have 6 meeples throughout the game – so you need to use them wisely! Otherwise you may find yourself getting frustrated when you run out of meeples just as you really need one. As well as the 6 meeples you do have 2 fishing huts which we’ll come onto in a minute.

Towards the start of the game you’ll be introducing the features and as you place more tiles each turn you play the game you’ll be looking to complete them. Whilst creating and completing new ones over time. When completing a stream or forest that has a meeple on it, this can be returned to the player to be reused later on in the game. This is then scored immediately.

However when placing a meeple on countryside it cannot be returned to the player and stays in place for the rest of the game. It is scored at the end of the game with points for all animals apart from tigers which can cost you points. To differentiate them – these meeples are placed on their side rather than standing up right (if on a stream or forest).

Two big changes are the introduction of fishing huts and also gold nuggets. The fishing huts can be placed on the stream tiles instead of their meeples. They work a bit like farmers in the original game in that they cannot be removed and are scored at the end of the game. They score points based on the number of fish in all connected lakes. Look out for gold nuggets when completing forests as this will give you a bonus tile to place down, where you can then place a meeple on it as well (where applicable). Each player can only receive this bonus once per go, even if they complete 2 or more forests with gold in them.

The scoring may initially seem quite complex when new to the game however the rulebook does a great job of explaining them and you’ll quickly become more familiar the more you play the game. Once the tiles run out the game ends and the player with the most points wins the game.

It’s for 2 to 5 players, ages 8 and upwards and takes on average 30 to 45 mins to play. Although there are similarities to the main game there are enough differences in the gameplay to warrant considering this either as alternative or in addition if already owned to play this version instead. If you’re a fan of strategy board games then it’s quite likely you’ll find this great fun to play with friends time and time again.

The only possible downside might be there isn’t the various expansions packs that are available for the main game. However you may find you won’t be needing any due to the extra differences in this version do bring a lot more to the gameplay. Each time you play will be different due to the layout of the board always changing by the tiles being placed differently each time. Your strategy will be adapting each time and taking into account the new variants in this version.

Are you ready to become a hunter and gatherer for your tribe? Available here