Who are the Inhumans that have been added to the Marvel Crisis Protocol game? 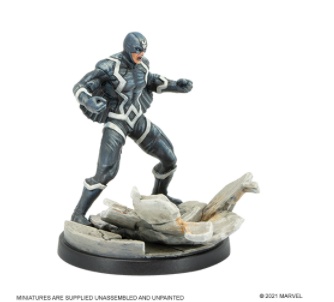 Black Bolt was born to two of Attilan’s top geneticists, Agon, head of the ruling Council of Genetics,
and Rynda, director of the Prenatal Care Center. Subjected to the mutagenic Terrigen Mist while still
an embryo, Bolt was born with strange powers surpassing even the Inhumans’ norm. As an infant, he
demonstrated certain energy-manipulative abilities which he could not yet control, particularly that
producing quasi-sonic energy of great destructive potential through his voice. To protect the community,
he was placed inside a soundproof chamber and given an energy-harnessing suit.[15] There he was schooled
in the art of controlling his powers until the age of nineteen, when he was permitted to enter society. 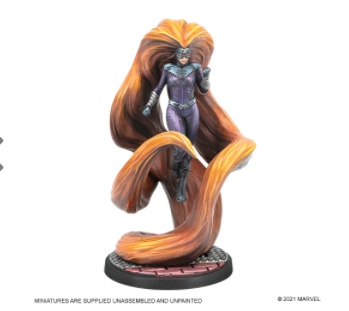 Medusa was the first of two children born to Inhuman nutritionists Quelin and Ambur. Medusa is considered
a member of Attilan’s Royal Family. Medusa’s parents elected to expose her to the mutagenic Terrigen Mist
when she was an infant; the process endowed her with hair she could animate like added appendages. While
still an adolescent, she began to make frequent visits to the isolation cell of her second cousin, Black
Bolt, and learned to communicate with him in a special sign language. Medusa and Black Bolt developed a bond
that blossomed into love when Black Bolt was first allowed out of his cell at age 18.
You can order this set at: https://www.bgextras.co.uk/marvel-crisis-protocol-black-bolt-and-medusa-i4870.htm
Chrystal and Lockjaw 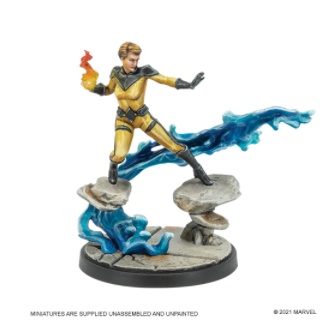 Crystal was the second child born to the Inhuman nutritionists Quelin and Ambur. She is considered part of
the Royal Family of Attilan. Like her older sister, Medusa, Crystal was subjected to the Terrigen Mist when
she was an infant, and the process endowed her with the ability to psionically control the four classical
elements: earth, fire, air, and water and, by extension, various other natural materials and phenomena such
as metals and electricity. 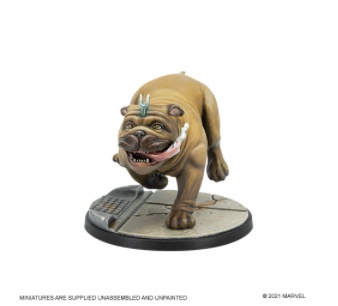 Lockjaw is a character in American comic books published by Marvel Comics. He is an Inhuman giant bulldog whose
abilities include teleportation. He serves the Inhuman Royal Family as their escort and as a loyal protector.
Lockjaw first appeared as a member of the Inhumans when they attempted to retrieve Medusa from the outside world
and take her back to Attilan. This led them into conflict with the Fantastic Four, the first humans they met, who
were harboring Medusa after rescuing her from the villainous Frightful Four. Accordingly, Lockjaw is indirectly
responsible for revealing the existence of Attilan to the outside world. They returned to Attilan.
You can order this set at: https://www.bgextras.co.uk/marvel-crisis-protocol-crystal-and-lockjaw-i4871.htm