Mystique Is Mutant that has the ability to change and adapt her appearance and voice to mimic anyone else that she wants to. She is one of Magnetos team who call themselves the Brotherhood of Mutants that feel they should rule the world instead of the humans who actually do.
She was created by artist David Cockrum and writer Chris Claremont, she first appeared in the comic book Ms Marvel #16 (April 1978)
her natural appearance includes blue skin, red hair and yellow eyes.[7] Typically portrayed as a foe of the X-Men, Mystique has been a supervillain founding her own Brotherhood of Mutants and assassination several important people involved in mutant affairs; she has been stated to be over 100 years old. Mystique is the mother of the X-Men hero Nightcrawler and the villain and Graydon Creed the adoptive mother of the X-Men heroine Rogue. 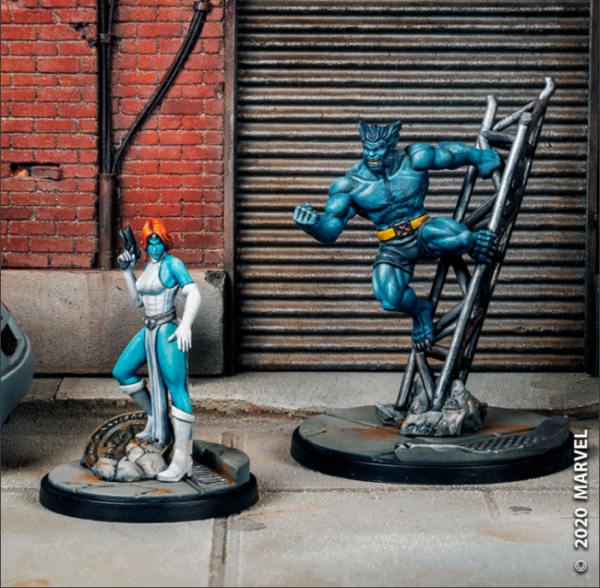 Beast is a member of the X-men as well as becoming a member of the Avengers Beast (Dr. Henry Philip “Hank” McCoy) the character was introduced as a mutant possessing ape-like superhuman physical strength and agility, oversized hands and feet, a genius-level intellect, and otherwise normal appearance and speech. Eventually being referred to simply as “Beast”, Hank McCoy underwent progressive physiological transformations, permanently gaining animalistic physical characteristics. These include blue fur, both simian and feline facial features, pointed ears, fangs, and claws. Beast’s physical strength and senses increased to even greater levels.
You can order this figure pack at: https://www.bgextras.co.uk/marvel-crisis-protocol-mystique-and-beast-i4712.htm