This game contains 168 cards, a gameboard, rulesheet, one custom six-sided die, and 12  cardboard standies with plastic stands. It is aimed at ages 10+ with an estimated play time of 1-2 hours and is for 3-6 players. 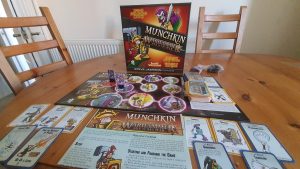 Mighty Battles for the Mortal Realms . . .
“The Eight Realms of Warhammer Age of Sigmar form a new battleground
for Munchkin players to explore – by which we mean kill monsters and take their stuff, obviously. First launched in 2015, Warhammer Age of Sigmar has found a home on game tables worldwide. Its rich story and variety of foes are a perfect match for your Munchkin game. Play as a soldier of one of the Armies in the Grand Alliances, as you fight against the numberless minions of Chaos and Death!
Best of all, it’s completely compatible with Munchkin Warhammer 40,000 and its expansions . . . create a truly epic battle by mixing the sets!” Quote from supplier

As this quote says, you can play it added to the Warhammer 40k sets but you will need to adapt a few bits, like there are vehicles in 40k but steeds in Sigmar. Also I find that the more you add the more likely that you will keep pulling similar cards out and you can only wear so many pairs of shoes.
Like in Munchkin Warhammer 40k they have the humour just right, if you know Warhammer you’ll love the in Jokes in the names of the cards as well as the artwork.
As usual with Munchkin this is a great little game that you just can’t take seriously.  Order your copy today at: https://www.bgextras.co.uk/munchkin-warhammer-c383.htm