This is a great game set in the Star Wars universe between the “Clone Wars” and “A New Hope” that gives you the chance to explore the planets of the Outer Rim (hence the name of the game) where you can find work to upgrade your ship, your weapons and any other kit you might want and you can get a crew members to help you. You can visit shops, collect bounties, do small jobs or large jobs. You can play as Lando, Bosk, IG88, Jyn Erso, Doctor Aphra, Boba Fett or Han Solo, as they Help friends from the Star Wars universe or take them in for their bounty price. The aim of the game is to amass the most fame. 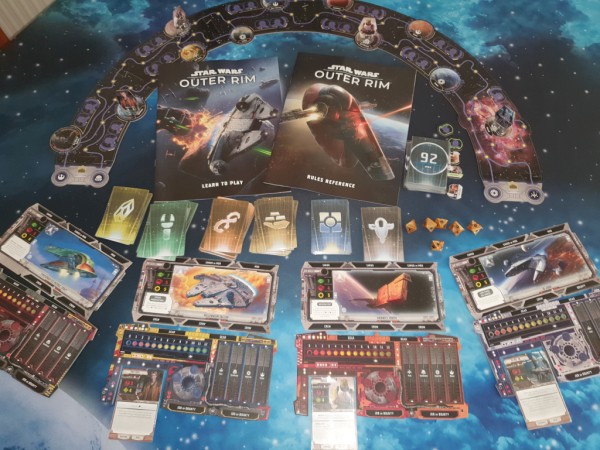 This is a good rounded game, the only niggle I had was that after several play through’s, some of the same job cards will be coming up, this will probably be fixed once FF get around to bringing out the first expansion (which knowing them wont be too far of) The character pieces are made from card placed in a card stand, which is fine but if like me you have “Imperial Assault” figures you can use instead.
I enjoyed this game a lot, it has a bit a of Firefly the board game about it (one of my all time favourites) But has less components so is quicker and easier to set up and set down. One of the reasons it reminds me of Firefly is that if you realise you aren’t going to win (or you don’t care if you do) you can just get your ship and have fun exploring. Being set in the Star Wars universe means that there is so much potential to this game where the inevitable expansions are concerned.

You can order this from us at: https://www.bgextras.co.uk/star-wars-outer-rim-i3661.htm