I am a big fan of Carcassone and have several versions of it. So was interested to see how different this was from the others. This edition plays in some of the same ways as the original, but the differences are profound. The scoring is completely different… I,ll explain the tiles first. The different land types are savanna, animal trails, bush and baobab trees. Savanna is like the grass on the original, animal trails are similar to the roads, the bush builds like the cities in the original and the baobab trees are played almost like the monasteries. The differences are that there is no farming, also there aren’t points for tiles that complete the bush or roads but for the amount of different types of animal on them. 1=1, 2=3, 3=6, 4=10 and 5=15 (there are only 5 types of animal) also there are points for each bird in the bush.

There are also 50 animal / watering hole tokens. (10 each of the 5 animal types) these can be used to build watering holes on the savanna. If you don’t place a meaple you can place a watering hole token. The first one you place a meaple with. Each token placed on the watering hole must be a different animal type than the previous one you placed. You can’t place a token next to someone else’s watering hole but you can start one opposite another players if there is only one token so far placed. There animals can be the same as the other players (if they had placed a zebra, you can also place a zebra) The tokens placed score 3 for the first and then 4, then 5 and finally 6. Once you complete a watering hole all the meaples on the feature are returned to their players and they score another 3 points. You can also through one of the animal / watering holes away to add an animal of that type to a bush you have just completed. 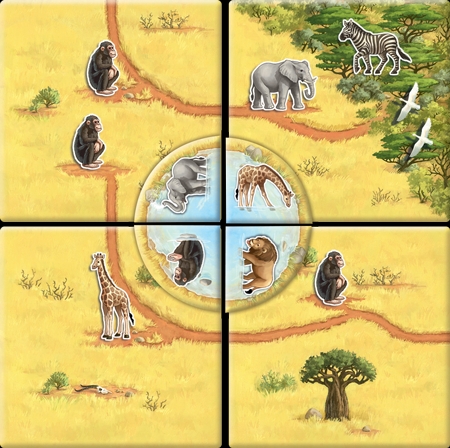 The baobab trees don’t score at all, but are the only way to get more animal / watering hole tokens. As you place the tile with the baobab tree on it, you can place a meaple (lying down) on the tree, if you do then you get 2 random tokens to place face up in front of you. If you can completely enclose the tile (8 around it) you get your meaple back and gain 2 more random animal tokens.

I found this game a breath of fresh air with it’s new way of playing. A great game that is a little more complex than basic Carcassone and yet still plays so easily. This is the most different of the Carcassones that I have so far played. I am so glad to have added it to my collection and can’t recommend it highly enough.
You can order this at: https://www.bgextras.co.uk/carcassonne-safari-i3409.htm 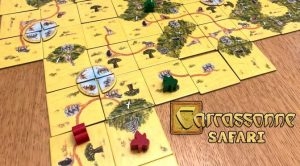