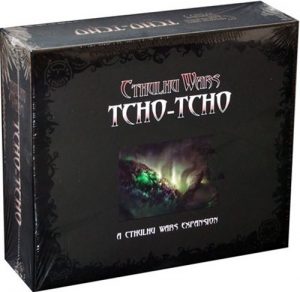 The Tcho-Tcho Expansion adds a new faction to Cthulhu Wars. The Tcho-Tchos are a human-based faction representing the physically advanced, but ethically repulsive Tcho-Tcho tribe with the ability to interfere with other players by worshipping their Great Old Ones! Your own Great Old One, Ubbo-Sathla, is a tool and slave, not an object of worship!

The Tcho-Tchos are generally weak in defense to begin with, but enemies are typically reluctant to attack an Area containing your High Priests. If they don’t send in Great Old Ones, the riff-raff can often be handled with Proto-Shoggoths–particularly with the Terror spellbook. The Tcho-Tchos have a major power advantage in the early game, because you normally spend 0 Power on your Great Old One. This power can be used not only to capture or build Gates, but to place units in enemy Start Areas to harass them with Tablets of the Gods.

Unique among Cthulhu Wars factions, the Tcho-Tchos have access to three high priests. In addition to the standard power generation and pacing benefits 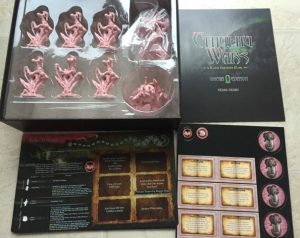 granted by recruiting additional high priests, the Tcho-Tchos exploit this advantage through two spellbooks based around high priests. The other distinction of the Tcho-Tchos is the way they interact with other factions; the spellbooks Tablet of the Gods and Idolotry enable the Tcho-Tcho faction to leech off other players, and Soulless makes your cultists less attractive to capture. Available here.