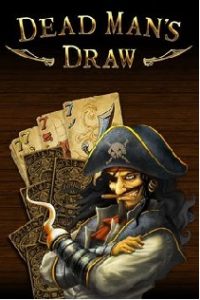 In Dead Man’s Draw, press your luck as a pirate trying to amass the most booty. But here’s the catch, get too greedy, and you could lose it all!

Dead Man’s Draw is a simple and strategic card game of risk and reward. Players take turns drawing cards and combining their special abilities to plunder the most loot without busting their entire hands. The core of your turn is all in the flip, pulling the top card off the deck and using its special ability. Your turn won’t be over until you decide that it is. You can keep pulling cards for as long as you like, until you play a card of a suit already seen. At this point you will lose everything. The biggest decision you’ll have to make is deciding when to stop and when to bank your cards. However, being too timid lets the braver opponents pass you up with the bigger, more profitable turns.

The card’s abilities are the key to success in Dead Man’s Draw. They build off of each other. Each suit in DMD has an effect that the player can target when they flip a card of that suit. Just a few of these cards are:

Many of the cards work well together. For example, you can use a hook to re-play a sword from 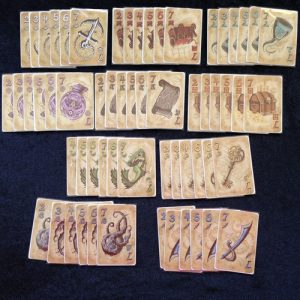 your hand in order to steal an opponent’s chest to go with your key. This allows you to rack up huge points by playing abilities will and not solely through the luck of the draw. As soon as the deck is exhausted, the players will total up the value of the highest card they have banked from each suit. The highest scorer wins.

Dead Man’s Draw is played by 2-4 players and can be played in roughly 10-15 minutes. Draw cards one at a time trying to collect the most money, consisting of ten suits with six cards each. Draw different suits and your treasure grows, but if you get two of the same suit you bust and your turn is over.

What will it be, Matey? Available Here.