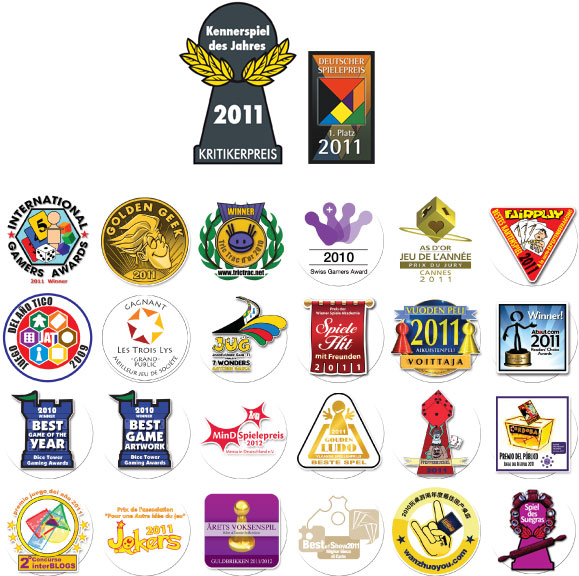 Time to discover one of the most awarded board games and build the greatest civilisation there has ever been in the Ancient World!

In the 7 Wonders board game you can compete with up to 6 friends to see who can achieve this. The gameplay is split in to 3 ages, where in each Age each player has the chance to gather resources, develop commercial routes and build military supremacy. Whilst also building their city and developing their architectural wonder to transcend all time.

However it is not as simple as it may sound as in each turn you can only choose one card to further your goals. During each Age you will have the opportunity to play 6 cards. Strategy comes into play here. Will you focus more on becoming a military force, becoming ground breaking on science or in building resources to trade? Probably a bit of everything, but deciding which one will give you the extra edge to win the game will be the deciding factor.

Each time you play the game it could be a different focus you decide to go with, making the gameplay unique each time. Your choice of which cards to focus on may be driven by the Wonder you start with. As the name suggests there are 7 wonders and you start with a random one each game.  Each wonder is one of the wonders of the ancient world, and has a different focus.  They may give you a boost to science, military, trading and more.  Thus making each game different from the beginning, and before you think you might get bored of just 7 wonders, each board has a second side, which is more complicated than the first side.  All of which adds to the fun and complexity of this great game.  Also as with any board game, there are also a number of expansions which give you more wonders and they have just released a wonders pack.

For those familiar with playing Race for the Galaxy or Dominion will know the card development feature of this game. As well as Fairy Tale or Magic The Gathering booster draft, the exception being each card is played immediately after being drafted. This allowing you to see which cards your neighbours are getting and how this might be affecting your strategy to then be able to react in future turns.

The winner is decided by who has the most points, which are on the cards collected each turn and the military conflicts won at the end of each Age. It is officially for 3 to 7 players (ages 10 upwards), however within the instructions there are rules for a 2 player game as well. You may be thinking that a 7 player game is going to drag on.  Not a game of 7 wonders because you each play simultaneously meaning that a game even with 7 players only takes 30 minutes to play. Allowing plenty of time to play multiples games with friends.

Are you ready to build the greatest civilisation the ancient world has ever seen? Available to buy here

Be quick too as for a limited time period there is 15% of to celebrate what a great game we think this.

For those that want to protect their cards, there is also special offer also mentioned with the Multi-coloured card sleeves. Ideal for making the cards last longer as they will fit snugly within the sleeves an the coloured backs match the colour of each age.